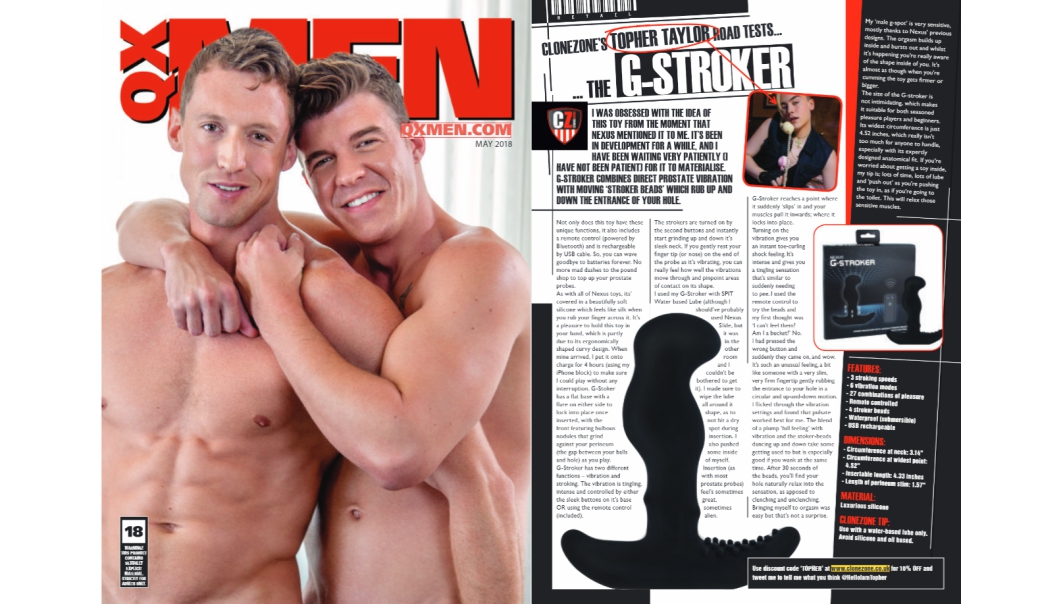 I was obsessed with the idea of this toy from the moment that Nexus mentioned it to me. It’s been in development for a while, and I have been waiting very patiently (I have not been patient) for it to materialise. G-STROKER combines direct prostate vibration with moving ‘stroker beads’ which rub up and down the entrance of your hole.
Not only does this toy have these unique functions, it also includes a remote control (powered by Bluetooth) and is rechargeable by USB cable. So, you can wave goodbye to batteries forever. No more mad dashes to the pound shop to top up your prostate probes.

As with all of Nexus toys, its’ covered in a beautifully soft silicone which feels like silk when you rub your finger across it. It’s a pleasure to hold this toy in your hand, which is partly due to its ergonomically shaped curvy design. When mine arrived, I put it onto charge for 4 hours (using my iPhone block) to make sure I could play without any interruption. G-Stoker has a flat base with a flare on either side to lock into place once inserted, with the front featuring bulbous nodules that grind against your perineum (the gap between your balls and hole) as you play. G-Stroker has two different functions – vibration and stroking. The vibration is tingling, intense and controlled by either the sleek buttons on it’s base OR using the remote control (included).

The strokers are turned on by the second buttons and instantly start grinding up and down its sleek neck. If you gently rest your fingertip (or nose) on the end of the probe as it’s vibrating, you can really feel how well the vibrations move through and pinpoint areas of contact on its shape.

I used my G-Stroker with SPIT Water-based Lube (although I should’ve probably used Nexus Slide but it was in the other room and I couldn’t be bothered to get it). I made sure to wipe the lube all around its shape, as to not hit a dry spot during insertion. I also pushed some inside of myself. Insertion (as with most prostate probes) feels sometimes great, sometimes alien. G-Stroker reaches a point where it suddenly ‘slips’ in and your muscles pull it inwards; where it locks into place.

Turning on the vibration gives you an instant toe-curling shock feeling. It’s intense and gives you a tingling sensation that’s similar to suddenly needing to pee. I used the remote control to try the beads and my first thought was ‘I can’t feel them? Am I a bucket?’ No. I had pressed the wrong button and suddenly they came on, and wow. It’s such an unusual feeling, a bit like someone with a very slim, very firm fingertip gently rubbing the entrance to your hole in a circular and up-and-down motion.

I flicked through the vibration settings and found that pulsate worked best for me. The blend of a plump ‘full feeling’ with vibration and the stoker-beads dancing up and down take some getting used to but is especially good if you wank at the same time. After 30 seconds of the beads, you’ll find your hole naturally relax into the sensation, as opposed to clenching and unclenching. Bringing myself to orgasm was easy but that’s not a surprise. My ‘male g-spot’ is very sensitive, mostly thanks to Nexus’ previous designs. The orgasm builds up inside and bursts out and whilst it’s happening you’re really aware of the shape inside of you. It’s almost as though when you’re cumming the toy gets firmer or bigger. The size of the G-stroker is not intimidating, which makes it suitable for both seasoned pleasure players and beginners.

Its widest circumference is just 4.52 inches, which really isn’t too much for anyone to handle, especially with its expertly designed anatomical fit. If you’re worried about getting a toy inside, my tip is; lots of time, lots of lube and ‘push out’ as you’re pushing the toy in, as if you’re going to the toilet. This will relax those sensitive muscles.

Topher tip:
Use with water-based lube only. Avoid silicone and oil-based.

Use discount code ‘TOPHER’ at www.clonezone.co.uk for 10% OFF and tweet me to tell me what you think @HelloIamTopher 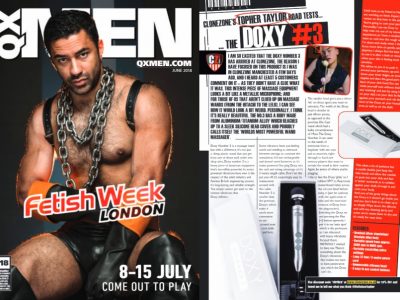 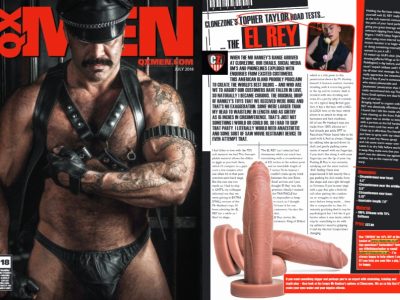 So excited for tier 2 x

What’s your worst one night stand story? Mine was sleeping with my ‘straight’ flat mate on the first night of freshers

@helloiamtopher Watermarked with the name of the person you are sending it to obviously.

@helloiamtopher Some really good advice I received was always watermark nudes so if someone leaks them you know who did it. Also 9:15 mwahahahaha

Someone has been distributing rude photos of me and I have their phone number. The fool did it to someone that I know. 2010 Topher would’ve tweeted their number.