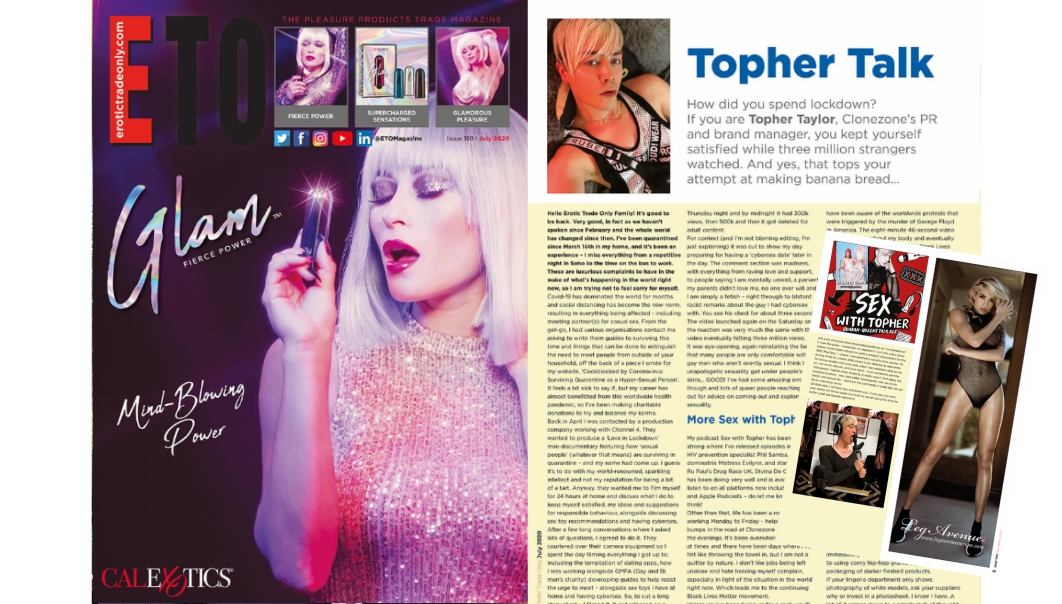 It’s good to be back. Very good, in fact as we haven’t spoken since February and the whole world has changed since then. I’ve been quarantined since March 16th in my home, and it’s been an experience – I miss everything from a repetitive night in Soho to the time on the bus to work. These are luxurious complaints to have in the wake of what’s happening in the world right now, so I am trying not to feel sorry for myself.

COVID-19 has dominated the world for months and social distancing has become the new norm, resulting in everything being affected – including meeting partner(s) for casual sex. From the get-go, I had various organisations contact me asking to write them guides to surviving this time and things that can be done to extinguish the need to meet people from outside of your household, off-the-back of a piece I wrote for my website ‘Cockblocked by Coronavirus: Surviving Quarantine as a Hyper-Sexual Person’. It feels a bit sick to say it, but my career has almost benefitted from this worldwide health pandemic so I’ve been making charitable donations to try and balance my karma.

Back in April, I was contacted by a production company working with Channel 4. They wanted to produce a ‘Love in Lockdown’ mini-documentary featuring how ‘sexual people’ (whatever that means) are surviving in quarantine – and my name had come up. I guess it’s to do with my world-renowned, sparkling intellect and not my reputation for being a bit of a tart. Anyway, they wanted me to film myself for 24 hours home and discuss what I do to keep myself satisfied, my ideas and suggestions for responsible behaviour, alongside discussing sex toy recommendations and having cybersex. After a few long conversations where I asked lots of questions, I agreed to do it. They couriered over their camera equipment so I spent the day filming everything I got up to; including the temptation of dating apps, how I was working alongside GMFA (Gay and Bi men’s charity) developing guides to help resist the urge to meet – alongside sex toys I have at home and having cybersex. So, to cut a long story short – I filmed it.

It got released on a Thursday night and by midnight it had 300k views, then 500k and then it got deleted for adult content. For context (and I’m not blaming editing, I’m just explaining) it was cut to show my day preparing for having a ‘cybersex date’ later in the day. The comment section was madness, with everything from raving love and support, to people saying I am mentally unwell, a pervert, my parents didn’t love me, no-one ever will and I am simply a fetish – right through to blatant racist remarks about the guy I had cybersex with. You see his chest for about 3 seconds. The video launched again on the Saturday and the reaction was very much the same with the video eventually hitting 3 million views. It was eye-opening, again reinstating the fact that many people are only comfortable with gay men who aren’t overtly sexual. I think the unapologetic sexuality got under people’s skins… GOOD! I’ve had some amazing emails though and lots of queer people reaching out for advice on coming out and exploring sexuality.

My podcast ‘Sex with Topher’ has been going strong where I’ve released episodes interviewing HIV prevention specialist Phil Samba, female dominatrix, Mistress Evilyne and star of Ru Pauls Drag Race UK, Divina De Campo – it’s has been doing very well and is available to listen to on all platforms now including Spotify and Apple Podcasts – do let me know what you think! Other than that, life has been a routine of working Monday to Friday – helping manage the bumps in the road at Clonezone and writing in the evenings. It’s been overwhelmingly stressful at times and there have been days where I’ve felt like throwing the towel in, but I am not a quitter by nature. I don’t like jobs being left undone and hate hearing myself complain, especially in light of the situation in the world right now. Which leads me to the continuing Black Lives Matter movement.

Unless you’ve been living under a rock, you’ll have been aware of the worldwide protests that were triggered by the murder of George Floyd in America. The 8minute 46second video sent chills throughout my body and eventually made me vomit. I’ve followed the Black Lives Matter movement since day one, and have always had a vested interest in anti-racism due to my upbringing in a notoriously intolerant part of South London. I always wanted to do better and be better – but this isn’t about me. We work in an industry that circulates around the sexualisation of one another, communication and consent – so we are very much at the forefront of addressing racial fetishization. I saw a post from intimacy, relationship strategist AND sexpert, Shani Hart, in an industry Facebook group ‘Pleasure Professionals Place’ who was addressing Pipedream’s statement regarding the BLM movement – and the industry as a whole. Shani highlighted a recurring problem in our industry: the lack of representation of Blackness in photography, the use of polarizing names such as ‘Ghetto’ and ‘Black Bubble Butt’ – right through to pale-coloured dildos being named flesh whilst darker toys are named ‘Caramel’ ‘Chocolate’ etc. And she’s absolutely right (not that she needs my approval). Black bodies have been reduced to sexual commodities in so many areas of this industry and we must address that immediately – from calling Black dildos ‘BBC’ to using corny Hip-Hop graffiti style text on the packaging of darker fleshed products. If your lingerie department only shows photography of white models, ask your suppliers why or invest in a photo shoot. I know I have. A lot of it comes down to a simple lack of thought, and a lot of brands have responded positively as I’ve mentioned it over-the-years.

I remember an argument I got into a few years where I point-blank refused to write a product description for the ‘BBC Phat Boy’ – where I was labelled a social justice warrior. Or during Pride in London 2016 where I was labelled as anti-white for hiring models with dark skin, which was unfathomable to me as I am white, blonde and blue-eyed – I just wanted to use the little power I had to show diversity. It really wasn’t that deep, the reaction, however… was. And rather transparent. We can all do better and should do – and from the comments, it looks like we are all on a learning curve.

On that note, I will love you and leave you. I hope you are well; your stores will thrive again and that we are all using this time to better what our brands represent. 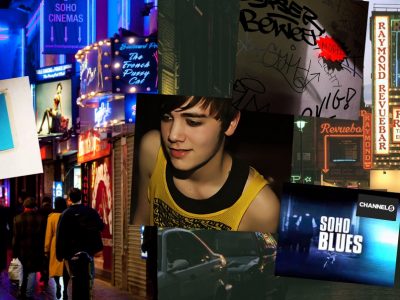 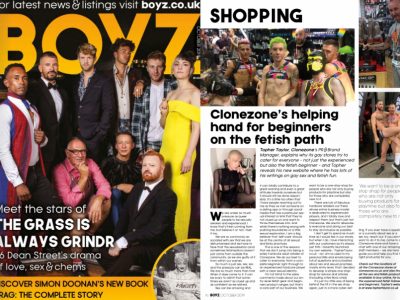 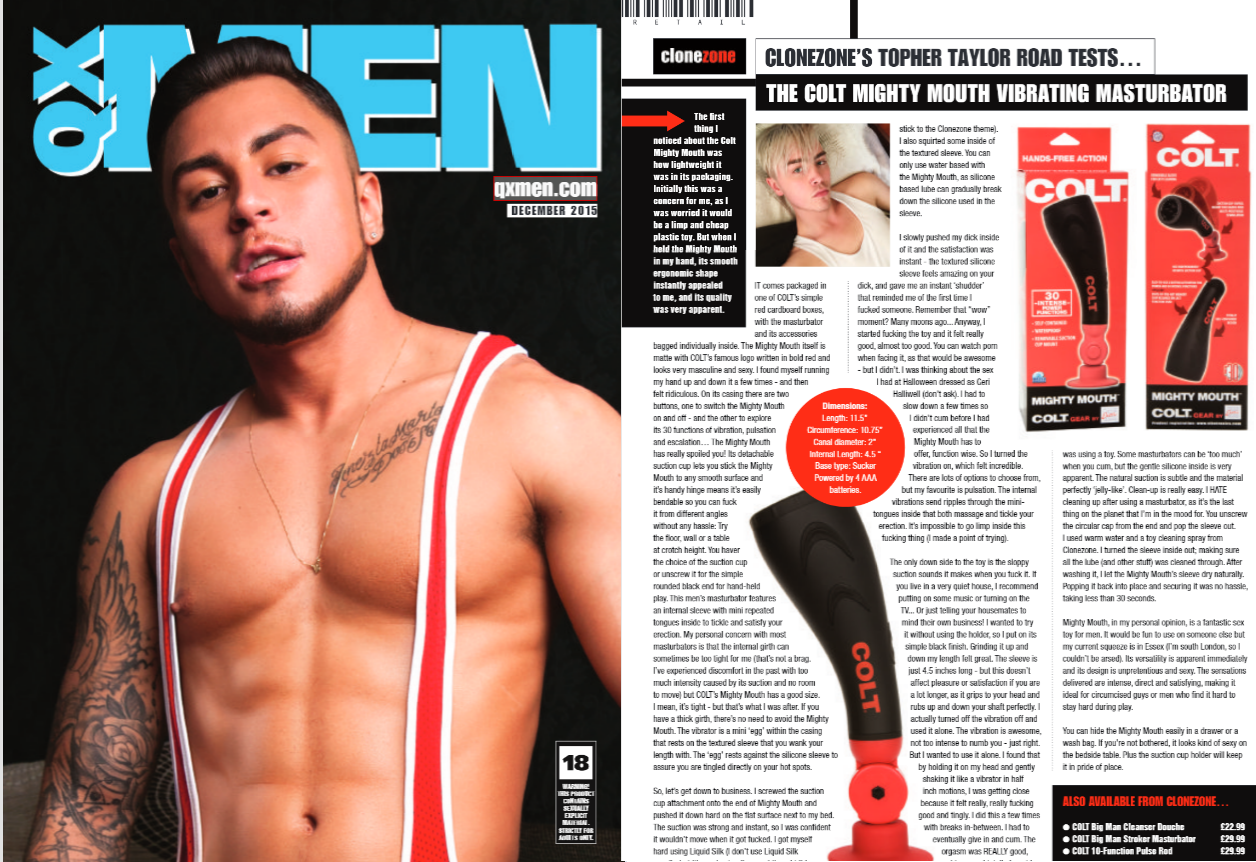 "We have to stop people automatically believing that if you get to
Britain, you'll stay in Britain."