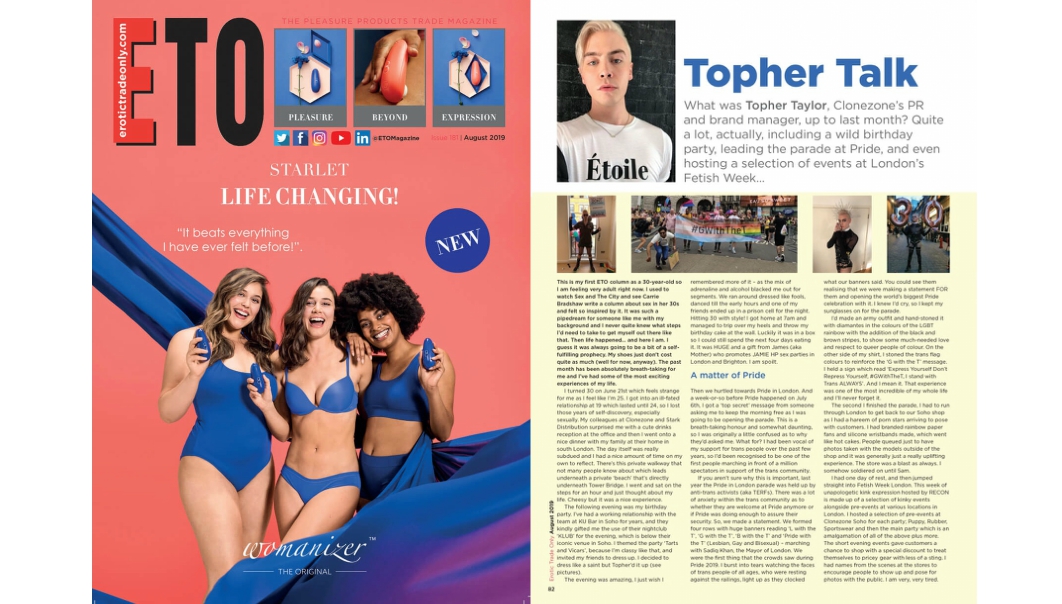 This is my first ETO column as a 30-year-old so I am feeling very adult right now. I used to watch Sex and The City and see Carrie Bradshaw write a column about sex in her 30s and felt so inspired by it. It was such a pipedream for someone like me with my background and I never quite knew what steps I’d need to take to get myself out there like that. Then life happened… and here I am. I guess it was always going to be a bit of a self-fulfilling prophecy. My shoes just don’t cost quite as much (Well for now, anyway). The past month has been absolutely breath-taking for me and I’ve had some of the most exciting experiences of my life.

I turned 30 on June 21st which feels strange for me as I feel like I’m 25. I got into an ill-fated relationship at 19 which lasted until 24, so I lost those years of self-discovery, especially sexually. My colleagues at Clonezone and Stark Distribution surprised me with a cute drink’s reception at the office and then I went onto a nice dinner with my family at their home in South London. The day itself was really subdued and I had a nice amount of time on my own to reflect. There’s this private walkway that not many people know about which leads underneath a private ‘beach’ that’s directly underneath Tower Bridge. I went and sat on the steps for the hour and just thought about my life. Cheesy but it was a nice experience.

The following evening was my birthday party. I’ve had a working relationship with the team at KU Bar in Soho for years, and the kindly gifted me the use of their nightclub ‘KLUB’ for the evening, which is below their iconic venue in Soho. I themed the party ‘Tarts and Vicars’, because I’m classy like that, and invited my friends to dress up. I decided to dress like a saint but Topher’d it up (pictures attached). The evening was amazing, I just wish I remembered more of it – as the mix of adrenaline and alcohol blacked me out for segments. We ran around dressed like fools, danced til the early hours and one of my friends ended up in prison cell for the night. Hitting 30 with style! I got home at 7am and managed to trip over my heels and throw my birthday cake at the wall. Luckily it was in a box so I could still spend the next 4 days eating it. It was HUGE and a gift from James (aka Mother) who promotes JAMIE HP sex parties in London and Brighton. I am spoilt.

Then we hurtled towards Pride in London 2019. And a week-or-so before Pride happened on July 6th, I got a ‘top secret’ message from someone asking me to keep morning free as I was going to be opening the parade. This is a breath-taking honour and somewhat daunting, so I was originally a little confused as to why they’d asked me. What for? I had been vocal of my support for trans people over the past few years, so I’d been recognised to be one of the first people marching in front of a million spectators in support of the trans community. If you aren’t sure why this is important, last year the Pride in London parade was held up by anti-trans activists (aka. TERFs). There was a lot of anxiety within the trans community as to whether they are welcome at Pride anymore or if Pride was doing enough to assure their security. So, we made a statement. We formed four rows with huge banners reading ‘L with the T’, ‘G with the T’, ‘B with the T’ and ‘Pride with the T’ (Lesbian, Gay and Bisexual) – marching with Sadiq Khan, the Mayor of London. We were the first thing that the crowds saw during Pride 2019. I burst into tears watching the faces of trans people of all ages, who were resting against the railings, light up as they clocked what our banners said. You could see them realising that we were making a statement FOR them and opening the world’s biggest Pride celebration with it. I knew I’d cry, so I kept my sunglasses on for the parade.

I’d made an army outfit and hand-stoned it with diamantes in the colours of the LGBT rainbow with the addition of the black and brown stripes, to show some much-needed love and respect to queer people of colour. On the other side of my shirt, I stoned the trans flag colours to reinforce the ‘G with the T’ message. I held a sign which read ‘Express Yourself Don’t Repress Yourself, #GWithTheT, I stand with Trans ALWAYS’. And I mean it. That experience was one of the most incredible of my whole life and I’ll never forget it.

I had one day of rest, and then jumped straight into Fetish Week London. This week of unapologetic kink expression hosted by RECON is made up of a selection of kinky events alongside pre events at various locations in London. I hosted a selection of pre-events at Clonezone SOHO for each party; Puppy, Rubber, Sportswear and then the main party which is an amalgamation of all of the above plus more. The short evening events gave customers a chance to shop with a special discount to treat themselves to pricey gear with less of a sting. I had names from the scenes at the stores to encourage people to show up and pose for photos with the public. I am very, very tired.

See you in August! 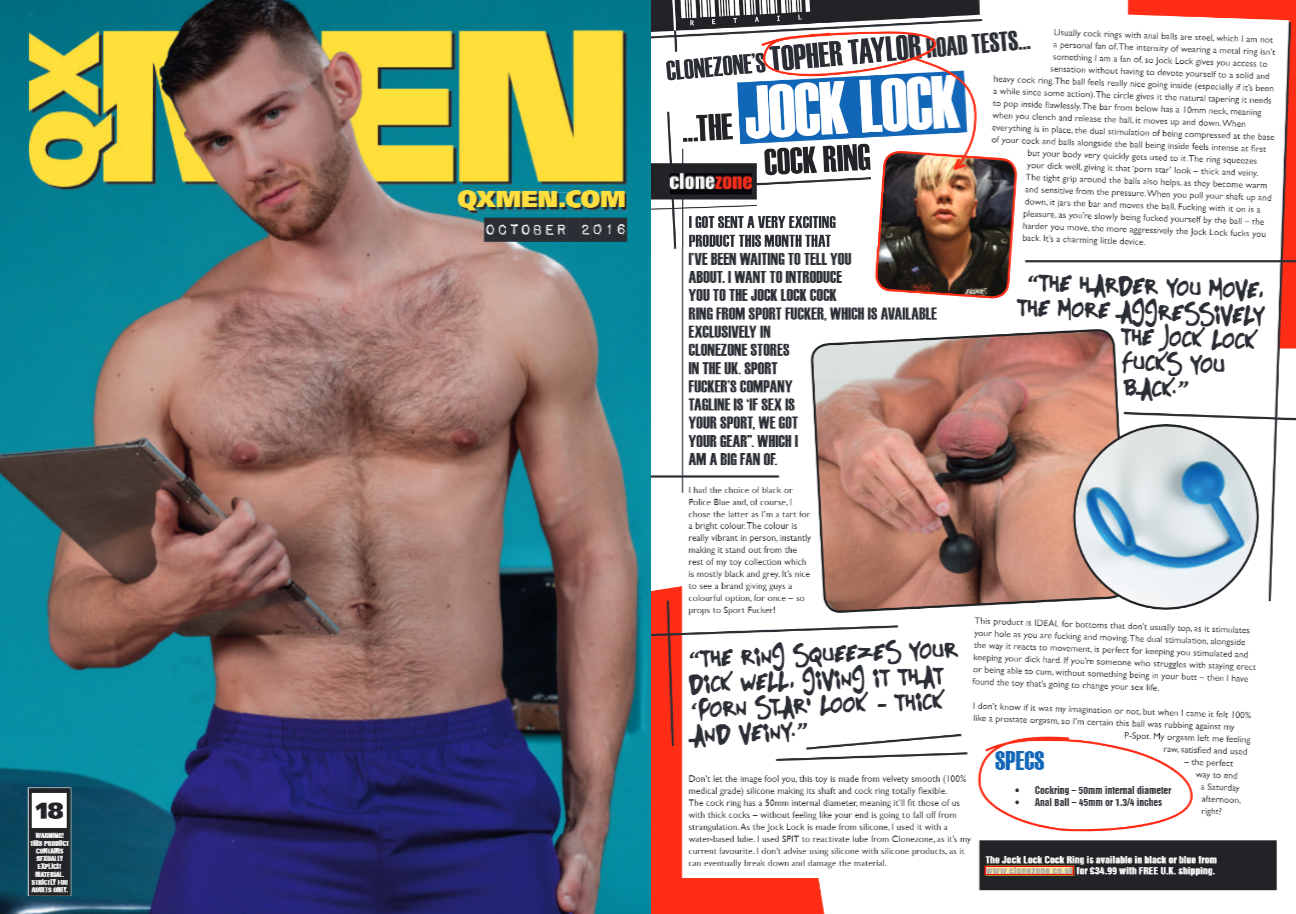 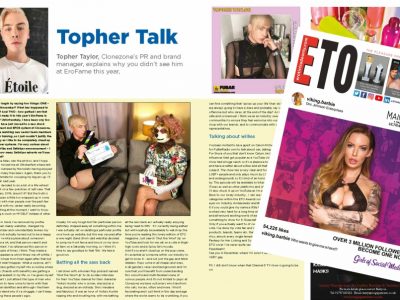 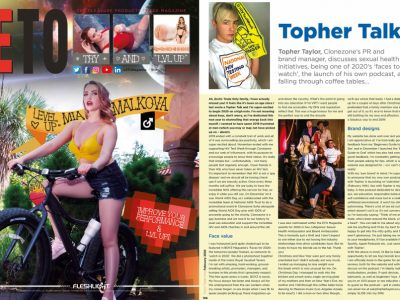