TopherTaylor
My Experiences
Comments Off on Me, Myself and I: Topher Taylor | BOYZ Magazine, December 2018

Me, Myself and I: Topher Taylor | BOYZ Magazine, December 2018 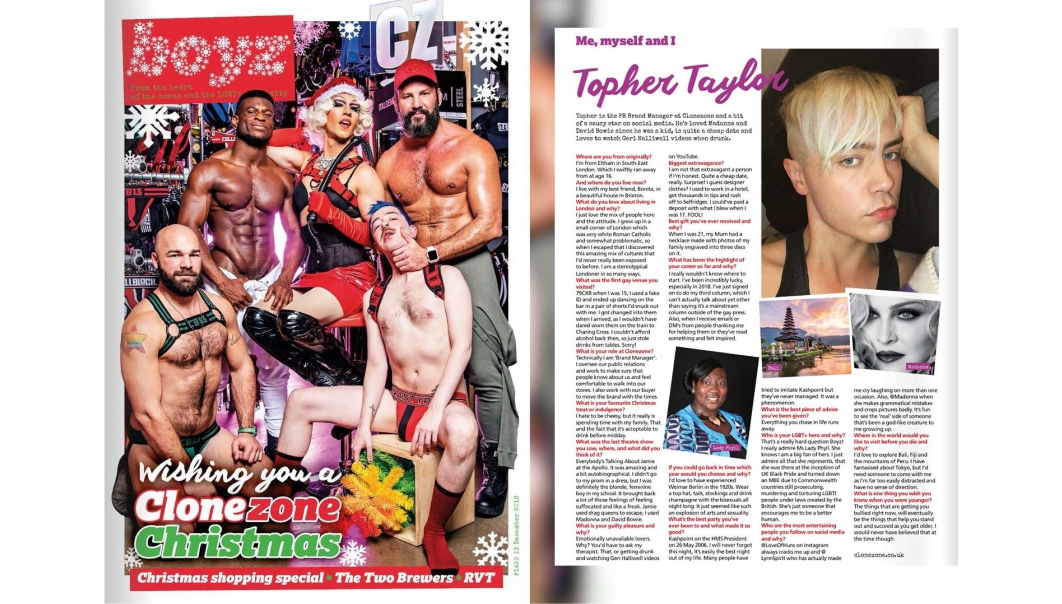 Topher is the PR Brand Manager at Clonezone and a bit of a saucy star on social media. He’s loved Madonna and David Bowie since he was a kid, is quite a cheap date and loves to watch Geri Halliwell videos when drunk.

Where are you from originally?

I’m from Eltham in South-East London. Which I swiftly ran away from at age 16.

And where do you live now?

I live with my best friend, Bonita, in a beautiful house in Brixton.

What do you love about living in London and why?

I just love the mix of people here and their attitude. I grew up in a small corner of London which was very white Roman Catholic and somewhat problematic, so when I escaped that I discovered this amazing mix of cultures that I’d never really been exposed to before. I am a stereotypical Londoner in so many ways.

What was the first gay venue you visited?

79CXR when I was 15, I used a fake ID and ended up dancing on the bar in a pair of shorts I’d snuck out with me. I got changed into them when I arrived, as I wouldn’t have dared worn them on the train to Charing Cross. I couldn’t afford alcohol back then, so just stole drinks from tables. Sorry!

What is your role at Clonezone?

Technically I am ‘Brand Manager’. I oversee our public relations and work to make sure that people know about us and feel comfortable to walk into our stores. I also work with our buyer to move the brand with the times.

What is your favourite Christmas treat or indulgence?

I hate to be cheesy, but it really is spending time with my family. That and the fact that it’s acceptable to drink before midday.

What was the last theatre show you saw, where, and what did you think of it?

Everybody’s Talking About Jamie at the Apollo. It was amazing and a bit autobiographical. I didn’t go to my prom in a dress, but I was definitely the blonde, feminine boy in my school. It brought back a lot of those feelings of feeling suffocated and like a freak. Jamie used drag queens to escape, I used Madonna and David Bowie.

What is your guilty pleasure and why?

Emotionally unavailable lovers. Why? You’d have to ask my therapist. That, or getting drunk and watching Geri Halliwell videos on YouTube.

I am not that extravagant a person if I’m honest. Quite a cheap date, really. Surprise! I guess designer clothes? I used to work in a hotel, get thousands in tips and rush off to Selfridges. I could’ve paid a deposit with what I blew when I was 17. FOOL!

Best gift you’ve ever received and why?

When I was 21, my Mum had a necklace made with photos of my family engraved into three discs on it.

What has been the highlight of your career so far and why?

I really wouldn’t know where to start. I’ve been incredibly lucky, especially in 2018. I’ve just signed on to do my third column, which I can’t actually talk about yet other than saying it’s a mainstream column outside of the gay press. Also, when I receive emails or DM’s from people thanking me for helping them or they’ve read something and felt inspired.

If you could go back in time which year would you choose and why?

I’d love to have experienced Weimar Berlin in the 1920s. Wear a top hat, tails, stockings and drink champagne with the bisexuals all night long. It just seemed like such an explosion of arts and sexuality.

What’s the best party you’ve ever been to and what made it so good?

Kashpoint on the HMS President on 26 May 2006. I will never forget this night, it’s easily the best night out of my life. Many people have tried to imitate Kashpoint but they’ve never managed. It was a phenomenon.

What is the best piece of advice you’ve been given?

Everything you chase in life runs away.

Who is your LGBT+ hero and why?

That’s a really hard question Boyz! I really admire Ms. Lady Phyll. She knows I am a big fan of hers. I just admire all that she represents, that she was there at the inception of UK Black Pride and turned down an MBE due to Commonwealth countries still prosecuting, murdering and torturing LGBTI people under laws created by the British. She’s just someone that encourages me to be a better human.

Who are the most entertaining people you follow on social media and why?

@LoveOfHuns on Instagram always cracks me up and @LynnSpirit who has actually made me cry laughing on more than one occasion. Also, @Madonna when she makes grammatical mistakes and crops pictures badly. It’s fun to see the ‘real’ side of someone that’s been a god-like creature to me growing up.

Where in the world would you like to visit before you die and why?

I’d love to explore Bali, Fiji and the mountains of Peru. I have fantasised about Tokyo, but I’d need someone to come with me as I’m far too easily distracted and have no sense of direction.

What is one thing you wish you knew when you were younger?

The things that are getting you bullied right now, will eventually be the things that help you stand out and succeed as you get older. I would never have believed that at the time though. 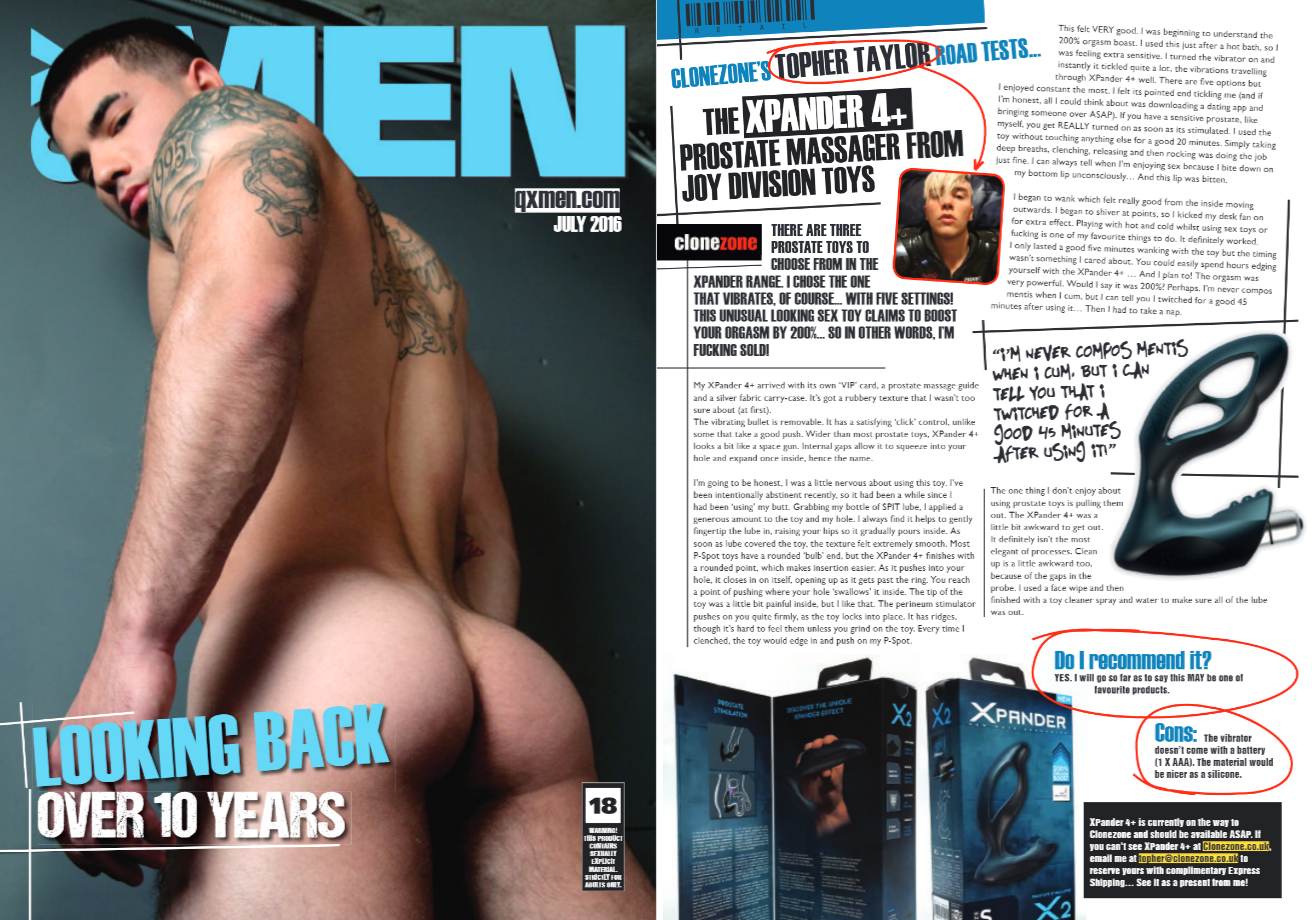 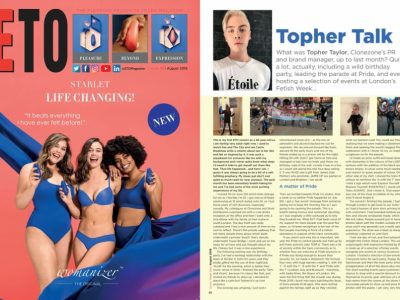 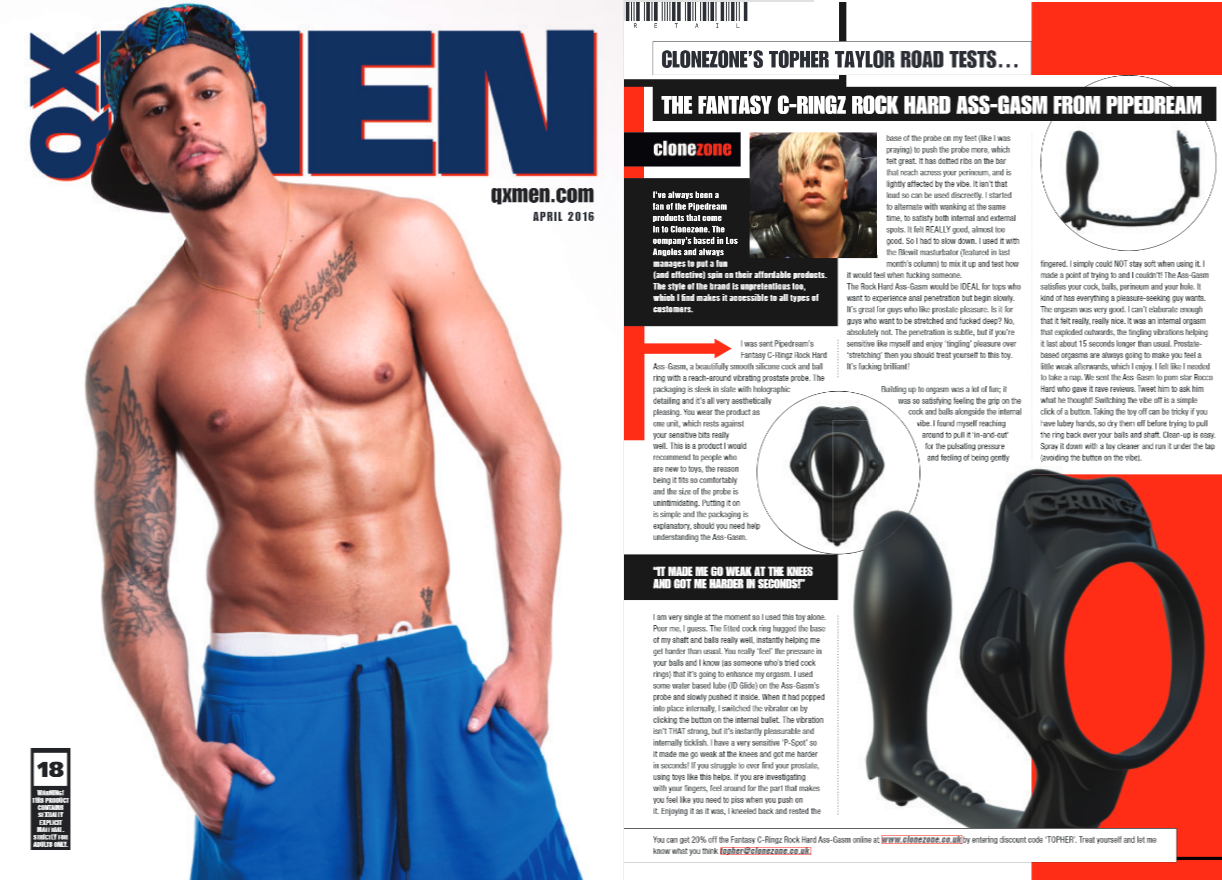 Had the best weekend ever ✨🎉🥳🪩🍾 Here's a little TikTok Grandma TT made.

My house is full of confetti, and champagne (I've actually started to like the flavour) and the sex I had yesterday has turned the living room floor into a silicone-lube ice rink.

@tophtaylor It's just the way you live your life is amazing. You're so comfortable with who you are. I'm in awe tbh

Had the best weekend ever ✨🎉🥳🪩🍾 Here's a little TikTok Grandma TT made.

My house is full of confetti, and champagne (I've actually started to like the flavour) and the sex I had yesterday has turned the living room floor into a silicone-lube ice rink.

You can read here: http://www.frolicme.com/blog/sex-tips-insights/rimming-how-to-enjoy-a-rim-job/

He left a chest hair on my face. Should I clone him? 🧪

One of the hottest men in the world is on the way to my flat right now to murder my anus. Happy Monday