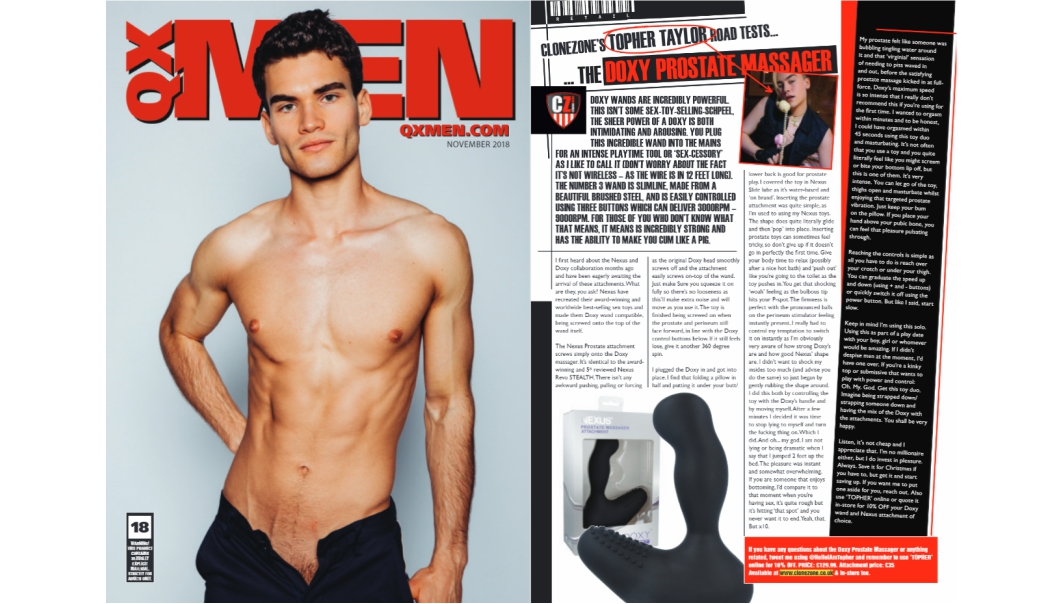 Doxy wands are incredibly powerful. This isn’t some sex-toy-selling-schpeel, the sheer power of a Doxy is both intimidating and arousing. You plug this incredible wand into the mains for an intense playtime tool or ‘sex-cessory’ as I like to call it (don’t worry about the fact it’s not wireless – as the wire is in 12 feet long). The number 3 wand is slimline, made from a beautiful brushed steel, and is easily controlled using three buttons which can deliver 3000rpm – 9000rpm. For those of you who don’t know what that means, it means is incredibly strong and has the ability to make you cum like a pig.

I first heard about the Nexus and Doxy collaboration months ago and have been eagerly awaiting the arrival of these attachments. What are they, you ask? Nexus have recreated their award-winning and worldwide best-selling sex toys and made them Doxy wand compatible, being screwed onto the top of the wand itself.

The Nexus Prostate attachment screws simply onto the Doxy massager. It’s identical to the award-winning and 5* reviewed Nexus Revo STEALTH. There isn’t any awkward pushing, pulling or forcing as the original Doxy head smoothly screws off and the attachment easily screws on-top of the wand. Just make Sure you squeeze it on fully so there’s no looseness as this will make extra noise and will move as you use it. The toy is finished being screwed on when the prostate and perineum still face forward, in line with the Doxy control buttons below. If it still feels lose, give it another 360 degree spin.

I plugged the Doxy in and got into place. I find that folding a pillow in half and putting it under your butt/lower back is good for prostate play. I covered the toy in Nexus Slide lube as it’s water-based and ‘on brand’. Inserting the prostate attachment was quite simple, as I’m used to using my Nexus toys. The shape does quite literally glide and then ‘pop’ into place. Inserting prostate toys can sometimes feel tricky, so don’t give up if it doesn’t go in perfectly the first time. Give your body time to relax (possibly after a nice hot bath) and ‘push out’ like you’re going to the toilet as the toy pushes in. You get that shocking ‘woah’ feeling as the bulbous tip hits your P-spot. The firmness is perfect with the pronounced balls on the perineum stimulator feeling instantly present. I really had to control my temptation to switch it on instantly as I’m obviously very aware of how strong Doxy’s are and how good Nexus’ shape are. I didn’t want to shock my insides too much (and advise you do the same) so just began by gently rubbing the shape around. I did this both by controlling the toy with the Doxy’s handle and by moving myself. After a few minutes, I decided it was time to stop lying to myself and turn the fucking thing on. Which I did. And oh… my god. I am not lying or being dramatic when I say that I jumped 2 feet up the bed. The pleasure was instant and somewhat overwhelming. If you are someone that enjoys bottoming, I’d compare it to that moment when you’re having sex, it’s quite rough but it’s hitting ‘that spot’ and you never want it to end. Yeah, that. But x10.

Reaching the controls is simple as all you have to do is reach over your crotch or under your thigh. You can graduate the speed up and down (using + and – buttons) or quickly switch it off using the power button. But like I said, start slow. Keep in mind I’m using this solo. Using this as part of a play date with your boy, girl or whoever would be amazing. If I didn’t despise men at the moment, I’d have one over. If you’re a kinky top or submissive that wants to play with power and control: Oh. My. God. Get this toy duo. Imagine being strapped down/strapping someone down and having the mix of the Doxy with the attachments. You shall be very happy.

Listen, it’s not cheap and I appreciate that. I’m no millionaire either, but I do invest in pleasure. Always. Save it for Christmas if you have to, but get it and start saving up. If you want me to put one aside for you, reach out. Also, use ‘TOPHER’ online or quote it in-store for 10% OFF your Doxy wand and Nexus attachment of choice.

If you have any questions about the Doxy Prostate Massager or anything related, tweet me using @HelloIAmTopher and remember to use ‘TOPHER’ online for 10% OFF. 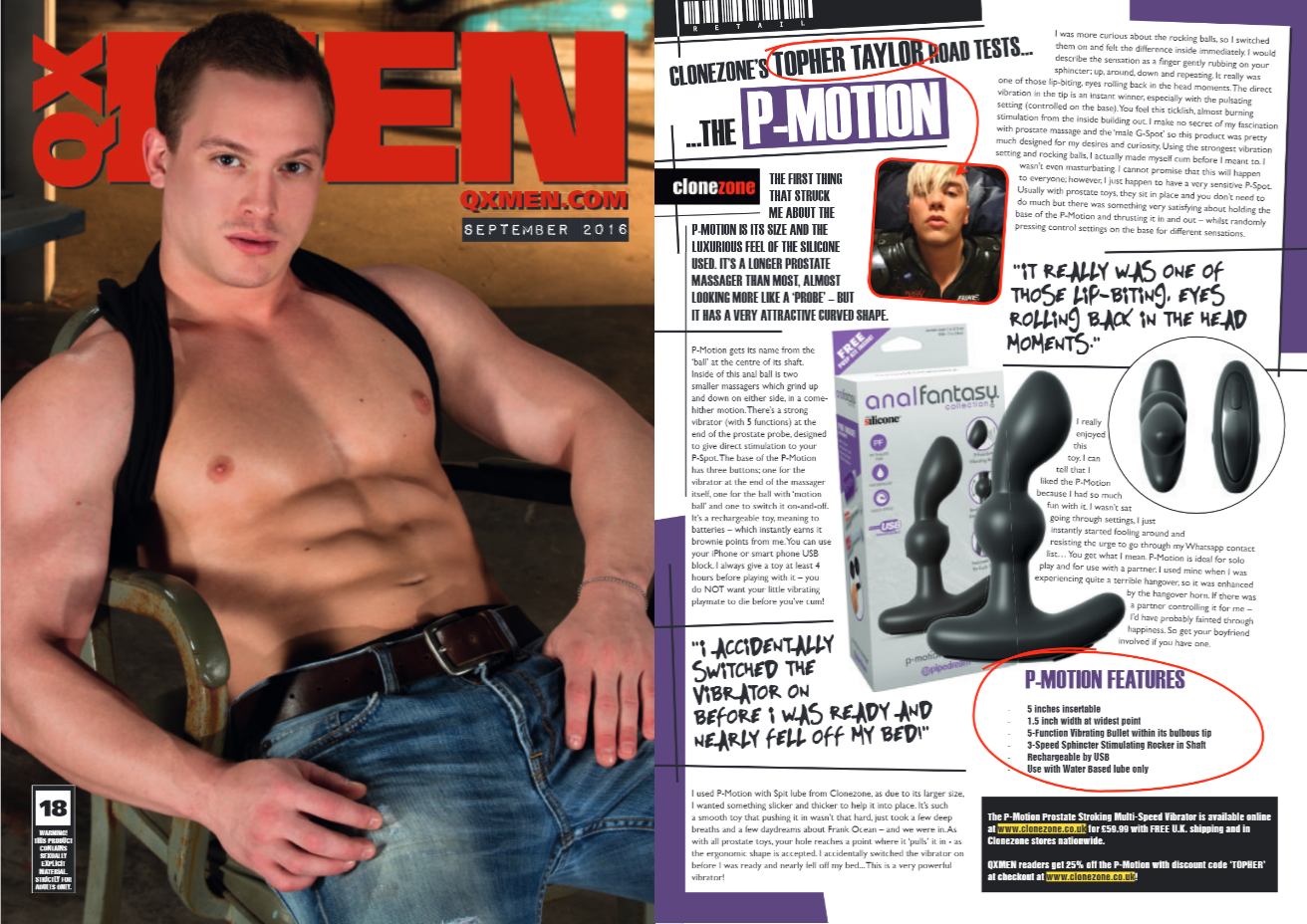 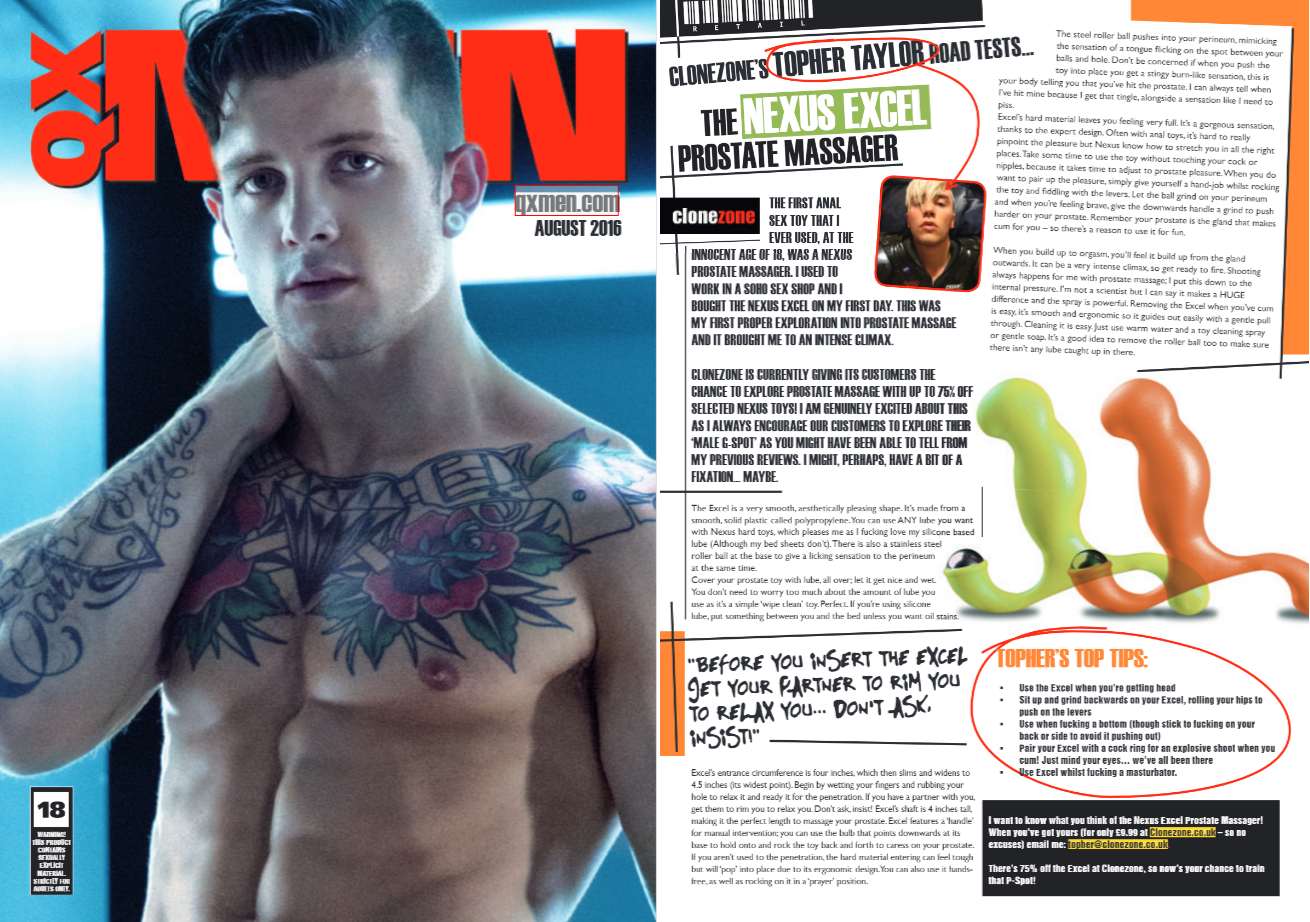