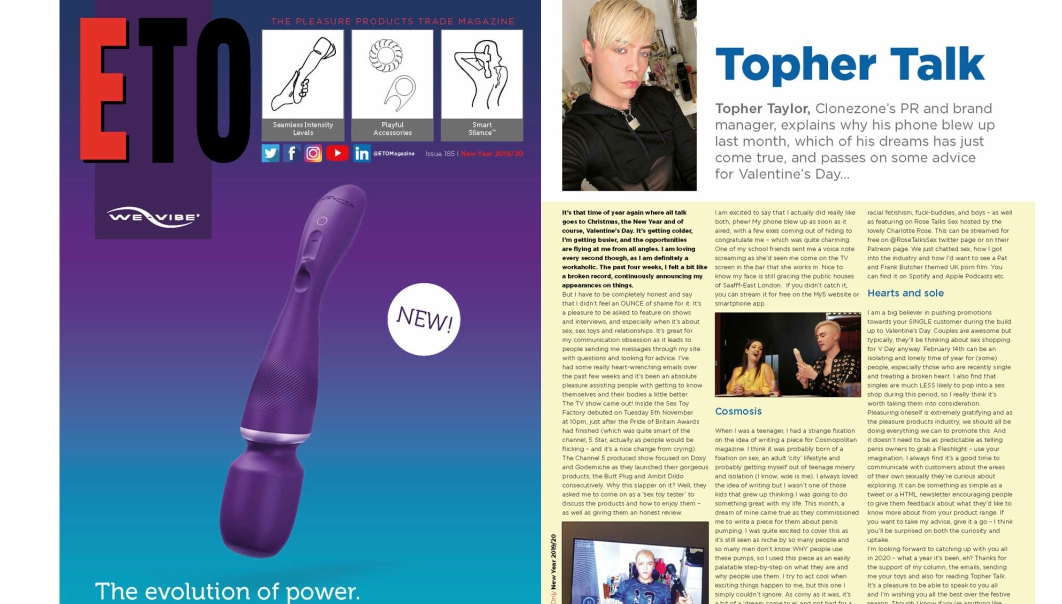 It’s that time of year again where all talk goes to Christmas, the New Year and of course, Valentine’s Day. It’s getting colder, I’m getting busier, and the opportunities are flying at me from all angles. I am loving every second though, as I am definitely a workaholic. In the past 4 weeks, I felt a bit like a broken record, continuously announcing my appearances on things. But I have to be completely honest and say that I didn’t feel an OUNCE of shame for it. It’s a pleasure to be asked to feature on shows and interviews, and especially when it’s about sex, sex toys and relationships. It’s great for my communication obsession as it leads to people sending me messages through my site with questions and looking for advice. I’ve had some really heart-wrenching emails over the past few weeks and it’s been an absolute pleasure assisting people with getting to know themselves and their bodies a little better.

The TV show came out! ‘Inside the Sex Toy Factory’ debuted on Tuesday 5th November at 10 pm, just after the Pride of Britain Awards had finished (which was quite smart of the channel, 5Star, actually as people would be flicking – and it’s a nice change from crying). The Channel 5 produced show focused on Doxy and Godemiche as they launched their gorgeous products; the Butt Plug and AMBIT Dildo consecutively. Why this slapper on it? Well, they asked me to come on as a ‘Sex Toy Tester’ to discuss the products and how to enjoy them – as well as giving them an honest review. I am excited to say that I actually did really like both, phew! My phone blew up as soon as it aired, with a few exes coming out of hiding to congratulate me – which was quite charming. One of my school friends sent me a voice note screaming as she’d seen me come on the TV screen in the bar that she works in. Nice to know my face is still gracing the public houses of Saafff-East London.  If you didn’t catch it, you can stream it for free on the My5 website or smartphone app.

When I was a teenager, I had a strange fixation on the idea of writing a piece for Cosmopolitan Magazine. I think it was probably born of a fixation on sex, an adult ‘city’ lifestyle and probably getting myself out of teenage misery and isolation (I know, woe is me). I always loved the idea of writing but I wasn’t one of those kids that grew up thinking I was going to do something great with my life. This month, a dream of mine came true as they commissioned me to write a piece for them about Penis Pumping. I was quite excited to cover this as it’s still seen as niche by so many people and so many men don’t know WHY people use these pumps, so I used this piece as an easily palatable step-by-step on what they are and why people use them. I try to act cool when exciting things happen to me, but this one I simply couldn’t ignore. As corny as it was, it’s a bit of a ‘dream come true’ and not bad for a college drop-out from South London.

I am a big believer in pushing promotions towards your SINGLE customer during the build-up to Valentine’s Day. Couples are awesome but typically, they’ll be thinking about sex shopping for V Day anyway. February 14th can be an isolating and lonely time of year for (some) people, especially those who are recently single and treating a broken heart. I also find that singles are much LESS likely to pop into a sex shop during this period, so I really think it’s worth taking them into consideration. Pleasuring oneself is extremely gratifying and as the pleasure products industry, we should all be doing everything we can to promote this. And it doesn’t need to be as predictable as telling penis owners to grab a Fleshlight – use your imagination. I always find it’s a good time to communicate with customers about the areas of their own sexually they’re curious about exploring. It can be something as simple as a tweet or an HTML newsletter encouraging people to give them feedback about what they’d like to know more about from your product range. If you want to take my advice, it would be to give it a go – I think you’ll be surprised at both the curiosity and uptake.

I’m looking forward to catching up with you all in 2020 – what a year it’s been, eh?! Thanks for the support of my column, the emails, sending me to your toys and also for reading ‘Topher Talks’. It’s a pleasure to be able to speak to you all and I’m wishing you all the best over the festive season. Though I know if you’re anything like me, you’ll spend 70% of it working, anyway.

p.s. I’m finally launching my very own podcast which should be available when this column comes out. I’ll keep you posted. 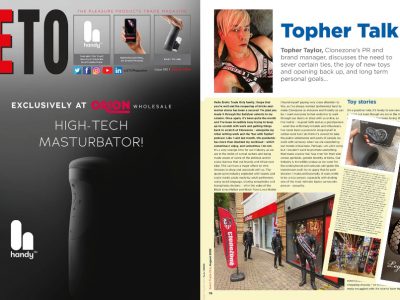 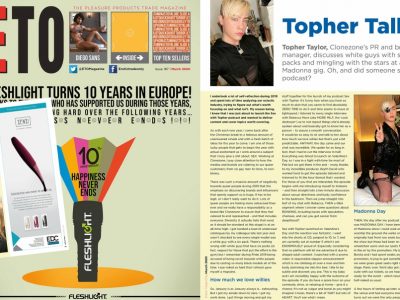 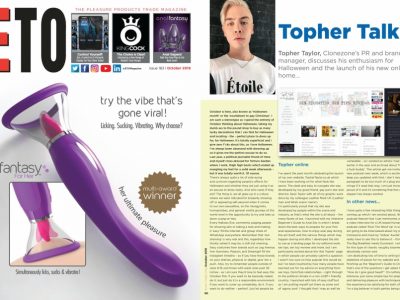